Summary: Imaginary friends and companions are a normal experience for most children, and are not a sign of mental illness or problems. Studies confirm that children with imaginary friends tend to be imaginative, better at seeing other’s perspectives, and better able to entertain themselves. They tend to grow up to be creative, imaginative, social adults.
Add to Info Cart
PDF 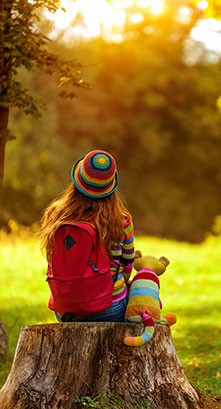 Imaginary companions are a normal experience for most children, and are not a sign of mental illness or problems. Studies confirm that children with imaginary friends tend to be imaginative, better at seeing other’s perspectives, and better able to entertain themselves. They tend to grow up to be creative, imaginative, social adults.

Aisha is a 5-yo girl with an imaginary friend named “Monkey”.  “Monkey” is her stuffed animal, which happens to be a monkey. Aisha began talking to her stuffed animal after the start of COVID quarantine. Parents appreciated Jenny as they both worked long hours. Aisha would say, “I’m off to play with Monkey now”, and then go off for half an hour and talk out loud with Monkey.

The other day however, Aisha appeared to be arguing with Monkey, which led parents to become worried -- there is a family history of schizophrenia.

What do you think?

What is an imaginary friend?

An imaginary companion or friend is "an invisible character, named and referred to in conversation with other persons or played with directly for a period of time, at least several months, having an air of reality for the child but no apparent objective basis" (Svendsen, 1934).

Imaginary friends are common and normal for many kids:

Examples of imaginary companions include:

Most of the time they are nice, and can help with coping. But sometimes, children report their imaginary friend is a nuisance, and may even have arguments with their friend (Carlson, 1993).

Why Do Kids Have Imaginary Companions?

Imaginary companions can be very helpful in meeting various needs such as:

Studies of preschoolers with imaginary friends have shown that:

What Happens With Imaginary Companions? Will My Child Grow Out Of It?

What happens to kids who have imaginary friends?

What happens to imaginary friends?

Most children grow out of their imaginary friend by age 11 (Carlson, 1993).

The writer Agatha Christie talked about having imaginary friends into adulthood.

Similar to an imaginary friend, is the concept of a “tulpa” in adults. Originally described in Buddhist cultures, the “tulpa” is a type of imaginary friend that is willed into existence by an adult through intense meditation. A tulpa has its own thoughts and feelings, and is distinct from the person who has created it. People with “tulpas” describe them as being helpful and encouraging in real-life situations (Luhrmann, 2013).

There is no evidence that having imaginary companions increases a child’s risk of later mental health problems.

When To See a Health Professional?

Consider seeing a health professional if:

Schwarz J: Imaginary friends: Most kids have one (or more), University of Washington News, published Dec 9, 2004.

Written by the health professionals at CHEO and eMentalHealth.ca.

Image credit: Rafinade | Stock.Adobe.com
Table of Contents
Summary
Aisha’s Story
Introduction
Why Do Kids Have Imaginary Companions?
What Happens With Imaginary Companions? Will My Child Grow Out Of It?
Are Imaginary Friends a Sign of Mental Illness?
When To See a Health Professional?
References
For More Information
Authors
License