Summary: Every one gets angry from time to time, but when one's anger is so severe that it causes problems in life, it may be a condition known as disruptive mood dysregulation disorder (DMDD). Some people are simply wired differently, and it is harder for their brains to self-regulate than others. It is important to recognize when a child is having problems with dysregulation, as there are many ways to support such a child to be more successful at home and school.
Add to Info Cart
PDF 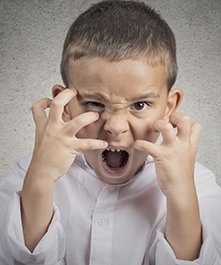 Dave is a 10-yo youth who has always had a spirited temperament. He is always easily irritated and easily triggered to have tantrums, on a daily basis, several times a day. Triggers for anger include making any sort of requests that take him away from a preferred activity (e.g. if parents ask him to get off the TV and come for dinner), or if he has a wish and parents say no (e.g. he wants to have another cookie and parents say no.) As he is getting older, his tantrums are harder to manage as he gets bigger. He has kicked holes in the walls and broken his door.

Parents have tried various parenting strategies (including making clear expectations with positive/negative rewards), but nothing so far seems to work.

Does your child/youth have:

If so, then read on to learn more…

Everyone gets angry from time to time. Anger is a natural reaction when people feel under threat, or when they feel something is unfair. Anger serves to let us know that something isn’t quite right, and can be a helpful signal for people to take action. If you never get angry, there is a risk you may get taken advantage of by others.

On the other hand, if a person is constantly angry and irritable, this tends to cause problems at home, work or school. And it may be a condition such as disruptive mood dysregulation disorder (DMDD)...

According to the Diagnostic Statistical Manual (DSM-5), DMDD is defined as the following:

DMDD is a relatively new diagnosis. It was created in an effort to better help those with severe anger. Prior to this diagnosis, people with severe, longstanding anger were often felt to have bipolar disorder, thus started on bipolar medications. As a result, the diagnosis of DMDD was created to help find better ways of supporting such individuals.

The Role of “Easy Dopamine”

Parents often report that their child/youth are triggered by the following:

One theory for such outbursts is the following:

Question: Why label someone with DMDD? Doesn’t everyone get angry from time to time?

Answer: It is true that everyone gets angry from time to time. DMDD is more than just normal anger. DMDD refers to those people who have severe, recurrent anger, to the point it causes problems in their lives. Studies show that people with DMDD go on to experience significant problems in their lives as they grow older. The good news, is by identifying those with DMDD, this gives opportunities to provide support and help with their anger.

Question: Is DMDD the same as bipolar?

Answer: DMDD describes people who have long standing anger most of the time. On the other hand, with bipolar, people have distinct episodes where they have symptoms. Making the distinction is important, as treatments are different for bipolar (such as possibly requiring mood stabilizers such as lithium).

Other Conditions Where Anger can be Seen

Are there problems that arise around daily routines? If so, write down your child’s routine on paper. Ensure there is a nice, visual schedule for the child so that they can understand what happens during their day.

Example of a Visual Schedule

Empathy for the child’s anger.

Are You Wondering if Your Child has Wondering DMDD?

Does your child have excessive anger, that hasn’t responded to various interventions? Start by seeing your primary care provider (family physician, paediatrician, nurse practitioner) about your concerns. They can start by ensuring that there aren’t any medical problems contributing, and help with referrals and next steps.

How is DMDD treated?

Are there other conditions (such as ADHD, learning disabilities, mood/anxiety problems, sensory processing problems, etc.)?

Are there problems with sensory processing?

Are there problems with motor issues?

When non-medication strategies are unsuccessful, medications can sometimes be helpful for DMDD. Medications are prescribed by a doctor, such as a family physician, paediatrician or psychiatrist.

Lives in the Balance. Website by Dr. Ross Greene that talks about the Collaborative and Proactive Solutions (CPS) approach.

Written by the eMentalHealth.ca Team.

Image credit: Adobe Stock
Table of Contents
David’s Story
Does your child/youth have:
About Anger
What is Disruptive Mood Dysregulation Disorder (DMDD)?
The Role of “Easy Dopamine”
Frequently Asked Questions (FAQs)
Other Conditions Where Anger can be Seen
Self-Help: Caregiver Strategies for DMDD

Are You Wondering if Your Child has Wondering DMDD?
How is DMDD treated?
For More Information
References
About this Document
Disclaimer
Creative Commons License

MindMasters
Started in 2000, MindMasters is a program that gives adults who work with or live with children, short, proven activities to do with children to help them learn positive living skills. Adults teach children all sorts of skills - tying their shoes, reading a book, riding a bike, cooking a meal. These practical skills help children to learn to manage the workd. There are other skills that children need to learn too. How to relax in a dentist's chair. How to channel feeling of anger so no one gets hurt. How to focus on a task to get it done. How to keep upbeat when life seems hard. We all need these skills to excel at living, to make the most of opportunities life offers to us. The program was created by Dr. Terry Orlick with the assistance of graduate students at the University of Ottawa and feedback from children, social workers, nurses, teachers and counsellors who have been doing the activities with children and evaluating their success for years. These positive-living skills activities have been assembled in the Mindmasters program and are being made available through the Positive Living Skills for Children project. You will find that the activities are suitable in all sorts of settings, particularly with children aged 4 to 12. You will find the music that supports the teaching of positive-living skills here.
Child and Youth Health Network for Eastern Ontario
Audience: Public (www.ementalhealth.ca)
Resource type: Printed materials including handouts, brochures and books

There are currently no practice guidelines attached to this article.
Add to Info Cart
Examples of Common Workplace Accommodations   Accommodations should be based on your needs and the employer’s resources. There is no standard list of reasonable accommodations, but here is a list of commonly provided workplace accommodations: Job coach assistance in hiring and on the job mentoring as necessary. Job coach/mentor could be from an external agency or be f...
More...