Summary: N-acetylcysteine (NAC) is a dietary supplement that can be helpful in the treatment of various mental health conditions.
Add to Info Cart
PDF 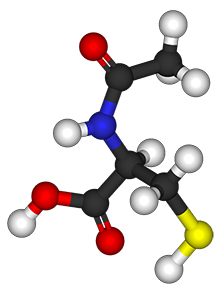 N-acetylcysteine (NAC) is a dietary supplement that comes from the amino acid L-cysteine. It is an antioxidant, and appears to help by protecting vital components (such as DNA) against oxidative damage, and appears to be helpful in various conditions including brain conditions.

How does N-Acetylcysteine Work?

Oxidation is a normal process that takes place in your body. However, this process can become imbalanced, leading to excess “oxidative stress”, which can cause damage in your cells.

NAC can help protect the body from oxidative stress. NAC is used by the body to make brain glutathione, which is an antioxidant.

Cysteine normally comes from the protein in the diet.

However, in certain conditions, the body may require more cysteine than is present in the diet, such as when people have:

N-Acetylcysteine (NAC) is a treatment for acetaminophen (aka paracetamol) overdose. When people take an overdose of acetaminophen, this depletes glutathione (GSH), which can then lead to liver damage. The solution? Giving NAC provides cysteine necessary to replace depleted glutathione (GSH) which then prevents liver injury.

NAC may also be helpful in other conditions where there is oxidative stress (Deepmala, 2015):

There is preliminary evidence for the following conditions, though more studies are required (Deepmala, 2015):

Evidence does not support the use of NAC with gambling, methamphetamine and nicotine addictions and amyotrophic lateral sclerosis.

As research is limited with NAC, it is generally not recommended unless more commonly accepted treatments have already been tried first.

A Word of Caution: Negative Evidence

Although there was initial promising evidence, two later meta-analyses have been less encouraging for major depression and bipolar disorder.

“... evidence does not encourage the use of NAC as an augmentation treatment for patients with MDD or BD. It remains to be seen whether NAC augmentation benefits depressed subpopulations, such as those with higher levels of inflammatory biomarkers at baseline.” (Andrade, 2021).

Most studies on NAC have been in adults. Few studies have looked at dosages for children and adolescents.

If you are interested in trying N-Acetylcysteine (NAC), it is recommended that you contact a health care provider so that they can provide specific advice on your particular situation. And if it is decided to start NAC, then they can monitor you through the trial to see if it is helpful or not.

Where to Find it?

As NAC is a supplement, note that NAC is not regulated in the same manner as standard conventional medications might be. There may be significant variations between manufacturers in terms of purity and the active ingredient.

Written by the health professionals at the Children’s Hospital of Eastern Ontario (CHEO) in Ottawa, Ontario, Canada. Special thanks to Dr. Paul Arnold for information about NAC dosages in adolescents.  Conflicts of interest: The authors have no competing interests to declare.

Image credit: Wikipedia
Table of Contents
What is N-Acetylcysteine?
How does N-Acetylcysteine Work?
Normal Dietary Sources of Cysteine
What Might It Be Helpful For?
A Word of Caution: Negative Evidence
Interested in Trying Out N-Acetylcysteine (NAC)?
Dosages and Duration
Where to Find it?
References
About this Article
Creative Commons license
Disclaimer