Summary: Concussion, also known as mild traumatic brain injury (TBI) is a common injury. The classic history is a direct blow to the head, neck, face, or to anywhere in the body that imparts an impulse injury to the head. Complications include post-concussion syndrome (PCS) in a small number of individuals, and can leave patients struggling with their symptoms for prolonged periods of time. Primary care providers play a key role in ongoing management of mild TBI.
Add to Info Cart
PDF 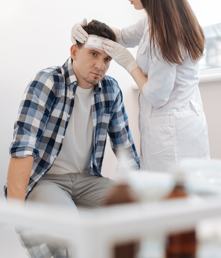 Case: “He hit his head… Is that why he’s depressed?”

P. is a 25-yo male, accompanied by his mother, in your primary care clinic. He has had symptoms of depressed mood. History shows that prior to the onset of depressed mood, he had a concussion…

Concussion, aka mild traumatic brain injury (TBI), has the following features defined by the 5th International Conference on Concussion in Sport:

Upon receiving a concussion:

While in an injured state, the brain is subsequently less able to sustain a second injury during this vulnerable period without an increased risk of long term sequelae, and even more so than when compared to two isolated injuries (Gizza et al., 2001).

Patients presenting with a history of direct blow to the head, neck, face, or to anywhere in the body imparting an impulse injury to the head should be evaluated and observed for symptoms of mild TBI.

If any of these questions are answered “yes” then:

Consider the Westmead Post-Traumatic Amnesia Scale (WPTAS), which is a simple test, taking less than 1 minute in the acute setting and correlated with more detailed neuropsychologic testing.

Any incorrect response is considered a positive test for cognitive impairment after head injury, and thus warrants further investigation.

Diagnostic criteria for mild traumatic brain injury (mild TBI) (outlined by the American Congress of Rehabilitation Medicine as a traumatically induced physiologic disruption of brain function, as manifested by 1 or more of the following (Cantu, 2011):

To count as mild, the severity of the injury may not exceed:

Diagnosis of mild TBI can be challenging as symptoms of concussion can also be seen amongst general trauma patients who have had no head injury and there are no objective tests to confirm diagnosis (Willer et al.,  2006).

The diagnosis of concussion is primarily clinical (Marshall et al., 2015).

The initial approach to a patient with a head injury or a change in cognition must be to rule out dangerous or life threatening conditions. One such approach is the Canada Head CT rules (Stiell et al., 2001).

In short this decision rule consists of 5 high-risk factors and 2 medium-risk factors that aid the clinician towards making evidence based prediction for which patients to image using CT for clinically important brain injury.

During the 24-hr period:

It is not abnormal for patients to experience 1 or more persistent symptoms as a consequence of their mild TBI for a short period (Marshall et al., 2012).  Minor problems and symptoms should be managed appropriately in addition to providing education and reassurance to patients that that a full recovery of symptoms is seen in the majority of cases.

Recovery, for most, is anticipated within days to a few weeks (Marshall et al., 2012).

Consider the risk of depression or other mental health disorders in patients who have experienced mild TBI (Marshall et al., 2012).

Diagram taken with permission from Goulet, 2018

Concussions are no longer graded. Recovery is recommended to be sequential and focused on functional progression as symptoms clear and do not return with exertion whilst under the careful monitoring of a physician.

Return to Work or School

For individuals who experience persistent deficits following mild TBI, or who have difficulty once back at work, consider:

Monitor in all three of the domains typically affected by mild TBI:

Bearing in mind symptoms can be similar to, and possibly have overlap with other conditions such as depression, chronic pain, anxiety and other medical or psychiatric disorders, that anyone with symptoms persisting longer than 1 month should be considered for specialized assessment (Marshall et al., 2012).

Information in this pamphlet is offered ‘as is' and is meant only to provide general information that supplements, but does not replace the information from a qualified professional.