Summary: When faced with a child with oppositional defiant behaviours, parents often turn to their primary care provider. Oppositional defiant behaviours can be a normal part of a child’s development, and determining what is normal from dysfunctional can sometimes be difficult within the typical 15-min. appointment. It is important to identify and deal with any contributing factors to the oppositional behaviour, such as a child who is disconnected from parents, parents with unrealistic expectations for their child, or conditions such as attention deficit hyperactivity disorder (ADHD), mood/anxiety, or learning difficulties. Management is primarily through non-medication strategies such as parent education, which teaches parents different ways to work with their child to manage their child’s behaviours.
Add to Info Cart
PDF 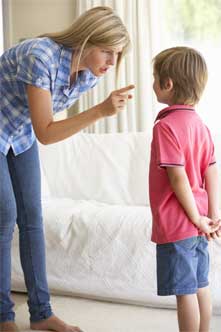 There are many factors which can contribute to a child’s oppositional/defiant behaviours, and most cases are multi-factorial:

A.     Pattern of angry/irritable mood, argumentative/defiant behavior, or vindictiveness lasting at least 6 months, as evidenced by ≥ 4 symptoms from any category, during interactions with ≥ 1 person (who is not a sibling):

4.     Often argues with authority figures (with adults if children)

5.     Often actively defies or refuses to comply with requests from authority figures or with rules

7.     Often blames others for his or her mistakes or misbehaviour

Distinguish from normal by persistence and frequency

B.     The disturbance in behaviour is associated with distress in the individual or others in immediate social context (family, peer group, work colleagues), or it impacts negatively on social, educational, occupational, or other important areas of functioning

C.     The behaviours do not occur exclusively during the course of a psychotic, substance use, depressive, or bipolar disorder. Also, the criteria are not met for disruptive mood dysregulation disorder

Differences between DSM-IV and DSM-5

Who to Refer to

Information in this pamphlet is offered ‘as is' and is meant only to provide general information that supplements, but does not replace the information from a qualified professional.